"Next best thing to being there!"

Quick links to all our sites:

PTZtv introduce "What's on PTZtv" --  a new preview page for all our webcams. Filling any size browser window, the single preview image includes a mosaic of snapshots from every camera. Point and click/tap on a mosaic tile to launch the full webcam website with live video. Automatic referesh every minute ensures What's on PTZtv is always current with activity at our many scenic locations.

Never miss a thing with What's on PTZtv on your desktop : WhatsOn.PTZtv.com ... our interactive TV Guide! 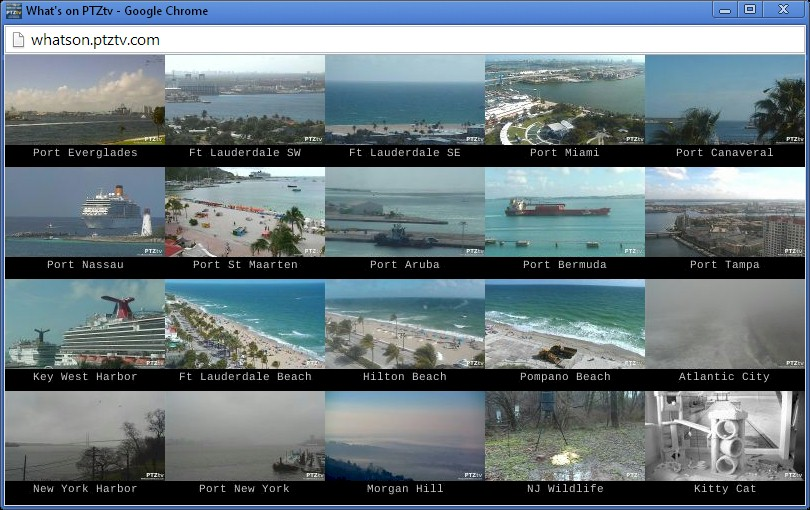 Hurricane Joaquin, a very strong category 4 hurricane on the east side of the Bahamas, moved north with an eventual track very close and to the west of Bermuda. Once again and throughout yet another powerful storm, Port Bermuda Webcam successfully streamed live video from the Royal Naval Dockyard in Bermuda..

Later on that Sunday evening, a freak wind event ripped roofing material up and over our camera. We kept broadcasting through the night but with only a peephole view between the debris. However, it became apparent that we were looking inside the roof's loft space and this signaled some major damage had taken place. By morning and first light, it was revealed that much of the east roof of the Commissioner's House had been ripped off and that our camera's mounting pole had been bent over by 45 degrees. A neighboring limestone chimney had been reduced to rubble. Given that signifcant roof clean-up and repair was required, we decided to remove our camera until new mounting hardware could be acquired and safely installed.

We plan to be back online before the upcoming round of the Lous Vuitton America's Cup World Series starting on October 16th, 2015. 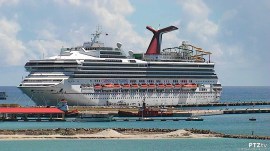 PTZtv in association with the Holland House Beach Hotel are proud to announce immediate availability of the new Port St. Maarten Webcam.

PTZtv chose the Holland House for their prime location on the beach boardwalk and Front Street with fabulous panoramic views of Great Bay and the cruise port. Just a short walk or ferry ride for visiting passengers, Holland House is the ideal spot to spend a beach day with food, drink, chairs and umbrellas readily available.

PTZtv provided both still photography services and candid live streaming video as all the contestants gathered on One Atlantic's scenic view deck. 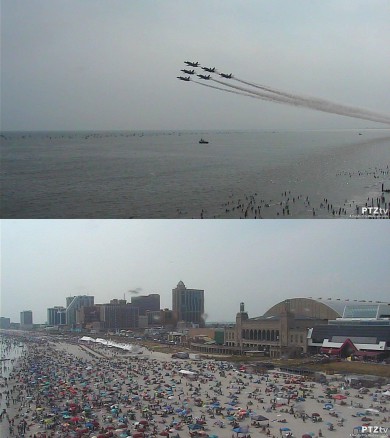 Atlantic City Webcam at One Atlantic Events had a bird's eye view of the Atlantic City Airshow, providing continuous live streaming coverage for hundreds of aviation fans around the country.

Headline display was the U.S Navy's Blue Angels, seen in this snapshop along with the beach, crowded with eager spectators. The deafening roar of their fighter jet engines was unmistakable. 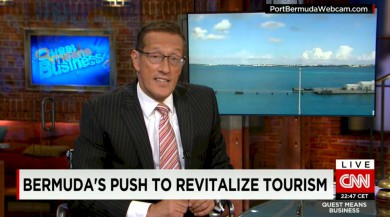 CNN, the Government of Bermuda and their Tourism Agency asked PTZtv for permission to use a live feed from our Port Bermuda Webcam as an intro for a CNN interview with Bermuda Premier Michael Dunkley.  We were more than happy to accommodate the request and our video was highlighted by CNN Anchor Richard Quest as he introduced the segment with Premier Dunkley.

Tropical moisture moved in from the south just after 9pm, triggering a very unusual weather pattern for the San Francisco Bay Area -- over 3 hours of dramatic thunder and lightning. PTZtv's live streaming Morgan Hill Webcam was first to spot the approaching cells and recorded many lightning bursts in the South Santa Clara Valley region. Local news media asked to use our live feed and we were prominently featured on ABC 7 Bay Area News.

Highlights from the early part of the storm are shown in the video below :

A vegetation fire in the Eagle Ridge Golf Club community of Gilroy, CA started just after noon and spread to 7-8 acres before being contained by CAL FIRE and Gilroy Fire units. A full wildland fire response was initiated, which included CAL FIRE air attack by tankers and helicopters. Fortunately, no structures were damaged or threatened in this community of high-end hillside homes.

Norwegian Dawn at Heritage Wharf on 5-20

The Norwegian Cruise Lines vessel NORWEGIAN DAWN ran aground on a reef just after departing the Royal Naval Dockyard, Bermuda for her return to Boston. An electrical and/or mechanical problem briefly affected the ship's steering, leading to an unplanned path into the reef. PTZtv provided live coverage of Dawn's return to Heritage Wharf the following morning after an overnight float-off with the assistance of local tug boats. After extensive inspections including underwater dive teams, Norwegian Dawn was cleared to sail back to Boston that afternoon.

PTZtv LLC were represented at CSM 2015 last week by Lou Gnandt, Co-founder and Managing Partner. Lou met with a number of current and potential partners in the industry, seeking to reinforce and expand our relationships with both cruise lines and port locations, particularly in the Caribbean region.

In the photo below, Lou can be seen talking with industry leaders including Richard Fain, Chairman and CEO Royal Caribbean Cruises Ltd., Adam Goldstein, Chairman of CLIA and President & COO of Royal Caribbean Cruises Ltd., Pierfrancesco Vago, Executive Chairman of MSC Cruises and Richard Quest, International Business Correspondent with CNN who moderated the State of the Global Cruise Industry panel. 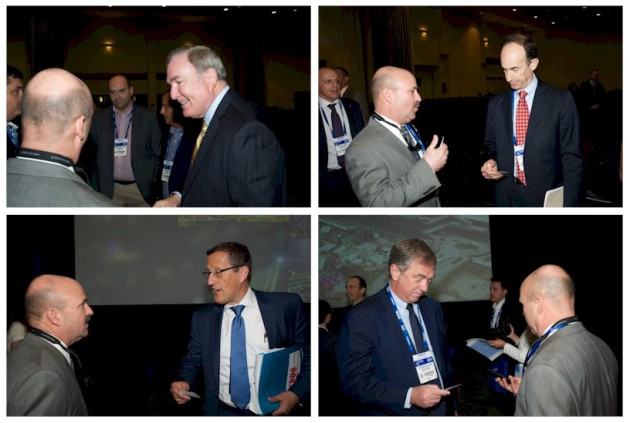 Our second addition to the animal cam genre is Kitty Cat Cam - 24/7 live video of cats and kittens in a foster home environment. KCC's goal is to help local rescue shelters by providing an alternate and virtual showcase for their cats who are up for adoption. Now prospective parents will be able to view these cats around-the-clock in a home environment instead of solely in a pet store or cage. In addition, we hope that viewers from around the world will be able to enjoy the many antics of our furry friends and occasionally share in the birth / development of new kittens.

Our first resident is nicknamed Jezzie-Belly and she's heavily pregnant. Stay tuned because we don't know when she will give birth. Check out our Kitty Cat Cam blog for Jezzie's story and watch her live at KittyCatCam.com

Signaling a new chapter in market development, PTZtv launched their first scenic webcam in the animal domain with the New Jersey Wildlife Cam.

Set deep in the woodlands of the State of New Jersey, NJWildlifeCam.com captures various animals in their natural habitat, streaming them live both night and day. Frequent visitors are the local white-tail deer but you will also see many different birds, an occasional fox, raccoon or maybe even a bear!

Check it out at : NJWildlifeCam.com

Here's where you can enter in text. Feel free to edit, move, delete or add a different page element.